Lets get it started!

BG just played Concord 2 weeks ago.The Cardinals pasted them 85-36 in a game that was over 3 minutes into the game .No upset here,Guertin cruises into the 2nd round.

Trinity lost to Exeter earlier in the year 69-61 .Many people believe the Pioneers were looking ahead to the BG game that night, myself included. Last year Exeter bounced Trinity from the tourny behind the stellar 3 point shooting of Brad Holler. Coach Keefe doesn't have to worry about that this year as young Mr. Holler is now firing them over at Lund Rd. Exeter has lost 7 in a row,make it 8.No upset here,Trinity bigs win big.

Memorial has won 10 of 11,West has lost 8 in a row. I know inner city rivalry,blah ,blah,blah.Not buying it. Even my good friend T@F sold his stock in West early in the season. No upset here. MADORIAL sends West packing.

Nice little story about how South has won 4 out of 5 to get the 13 seed. Maybe they are the team to deliver a 1st round upset.Don't even think about it. Those 4 teams they have beaten have a combined record of 15 wins, 57 losses. Meanwhile,Doc's Little Green have reeled off 5 straight wins against far superior teams. Combined records of the 5 teams, 46 wins, 44 losses. Coach Mazzerole, nice to have you back in the tournament, now go home. No upset here, Central crushes South.

North at Salem. Doesn't a 12 seed always pull off an upset against a 5 seed in the tournament? Wrong tournament sports fans. North losing those kids really hurts, and speaking of really hurts thats how kids usually feel the day after playing a very PHYSICAL Salem team. Keep looking, no upset here as Salem punishes North. That second round matchup with Central will be like Ali - Frasier.

Alvirne at Merrimack. Wait a minute, what do we have here folks? Merrimack had their heart pulled out of their chest against BG, then Doc had his team cut that heart up into little pieces and eat it. TWENTY TWO points in a game. Never seen that in Merrimack before. Meanwhile, Alvirne has won 9 of 12 and seems to be firing on all pistons. So you know what that means, nope , not doing it. No upset here. Merrimack has to much talent to tank 3 games in a row. They get by Alvirne, but next round is Memorial.Now that's another story.

Pinkerton at Londonderry. I can't jump off the Lancer bandwagon just yet. Pinkerton goes from defending champs to see ya next year. I love watching the Mansfield kid play.No upset here.

Dover at Spaulding.The best game of the night. Dover beat them earlier at Spaulding. If a 9 beats an 8 is it really an upset? Doesn't matter, no upset here as Spaulding rolls in a high scoring contest.Then they get to roll down to BG and see what it's like to play a hungry and healthy Guertin squad.

GNG or anyone that know's which day does the D1 tourney start?

Tuesday and Friday for D1, Wednesday and Saturday for D2. I like this week as it gives me 4 days of hoops... nice!

That's what I was hoping for might actually be able to see my first and second D1 games of the year.

South will be missing Thistle as well he got a T last game and the New AD in Nashua put in a new policy half way through the season a T equals next game suspension.

lost to Merrimack by 4

lost to Salem by 3 in OT

played Trinity tough losing by 14 on the road

lost to Memorial by 2 on the road as well

I don't know if I like that rule goldenbear

That seems to be to harsh of a punishment. There are different reasons technicals are given. Hanging on the rim,stupid stuff like that. If it's a physical confrontation with a player or ref that's one thing, but I know my kid got a t earlier this year when he told a kid to "stop crying to the ref's". I don't know south's situation. Have technicals been a problem for them this year Goldenbear? One other question. Does that also apply at North?

I agree GNG. It is difficult to criticize an administrator's policy or decision, but in this instance of receiving one technical and being suspended for the next game...... It does make you wonder, especially for the fact the policy was implemented half way through the season.

I believe there is only one AD for Nashua who splits duties at North and South... ergo it should apply to North as well.

That's a lot of duties for one AD.

If I were the Assistant

If I were the assistant right now I would close this post. We should not be second guessing our school system as they have the kids best interest in mind. We have to teach these kids not to act out and to listen to authority. You guys are so wrong for giving kids the feeling that talking back to refs is acceptable. I am outraged.. lol

Yes it is for North as well and yes it is a tough policy, Mike O'Conner and Ryan Guathier were suspended for the North South game because of T's they got in the prior game against Londonderry. Gauthier hard words with an official , OConnor got caught in an elbow war with Mansfield and got the retaliation whistle. So it does not matter what type of T is is and I am not sure why the policy was issued mid season. It was done after the X mas tourney which I did not see a lot of.

It looks like we will have to make a Sarcasm Section to go with the Bleachers on the forum. Wait a minute.... at some gyms there's a lot of sarcasm that is emanated from the bleachers.

ChiKid, I trust you are just trying to ease your mind with your above post because of the mental and physical rigors that lie ahead in the next 2 weeks.

Tough two weeks ahead of me.. I think I should get into baseball.. lol

I maintain this playoff season will be epic in a biblical way.

Both divisions will have some great 2nd round matchups if things play out the way I think they will.

The most discussed team heading into the playoffs is definitely Merrimack. Their combined 2 losses by 77 points to BG and Central was the talk of the HS b-ball community this weekend. I must have received at least 10 texts/e-mails with "What's going on with Merrimack" in them.

Coach Goodridge was on WGAM yesterday morning and here's what he had to say:

- "Not sure how we are going to turn it around. Our confidence level is down. It is my job to get it back up."

- "One of the biggest differences in the BG game was they march out all seniors and we play mostly younger kids."

- "Our weakness is we are a thin team physically."

T@F, I think Merrimack was exhausted after the BG game. BG had their second string in 4 minutes into the 3rd quarter,and their third string played the whole 4th. Meanwhile Merrimack had their starters in well into the 4th. They were gassed. I know they are kids and should recover quickly, but that game also took an emotional toll. BG looked a little sluggish to start the Salem game, and those kids got to rest most of the 2nd half.

Amazing a team would fight and scratch all year to host a home playoff game and then a situation like this comes up.

That would suck for the lancers. It is official. BG game 6:30

If there is any other schedule information or time updates for prelim games please post them.

I know I've had my share of watching 2nd halves this season, but I would really like to see a WHOLE playoff game instead of a HALF. 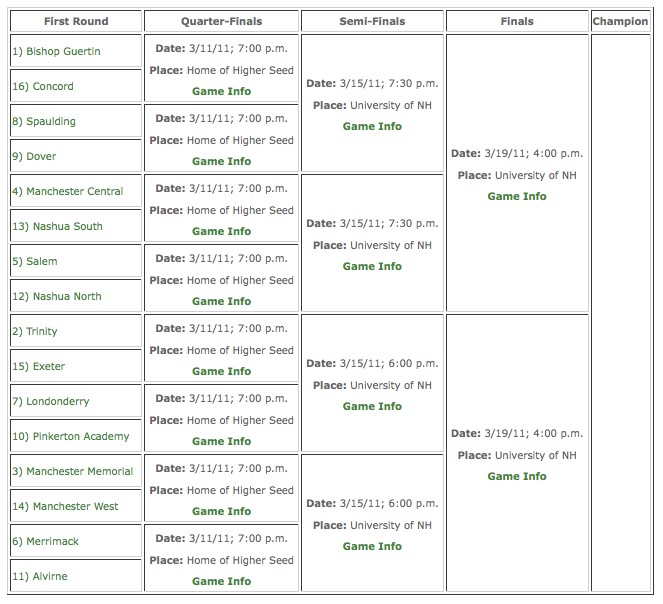 By the way - is there anything more confusing with how the NHIAA puts their gametimes on this bracket? It took me a while to figure out - but the 7pm starts listed here are for the quarterfinals, not the first round games. So essentially they list the same game twice...dumb.

And of course we have to guess as to what time the 1st round games start...ridiculous.

here's the low-down on the Londonderry/Pinkerton matchup. So much for Home Court.

"LHS boys basketball playoff game vs Pinkerton on Tues 3/8 will be played at NHTI Concord 7PM. tickets will be sold during all lunches."

WOW. You work for homecourt all year, and then this happens. Right now the crazy BG parents{me included} are in an uproar over the senior trip{mandatory} to Boston which is the same day as the semi finals. I know they have to win 2 games first, and if they are lucky enough to advance this will be talked about quite a bit next week. I can't even imagine how ticked off the Londonderry coaches,players,parent,and fans must be. Somebody dropped the ball.

I believe Pelham also has this situation and will be playing their home game at Windham. Not sure why with D2 being on Wednesday but apparently the gym will not be ready for Wednesday. I got this from the coach back in January. I believe they are fine if they win for the second round at home.