NHSP Has the bracket matchups - http://www.nhsportspage.com/basketball/tournament.php?tournament_id=97&division=Division%20II&year=

I agree with you but Goofstown vs OR will be good game.

I agree with you,
The real questions will be round two. Can Milford come ready to play against Bedford and not be over confident with the easier win this season?
Is Spirou healthy enough to keep Oyster River/Goffstown from getting a win? I Say YES!
Can Pembroke handle the size of Souhegan. This match intrigues me also. Souhegan has taken some losses lately without Gilligan but if he plays I am not sure who can guard him on Pembroke.
Portsmouth will be at UNH, no questions there.

Seeing I have today off I am doing some homework. Many are impressed with Goffstown this year, including the media. Think that has more to do with being next to Manchester and close to Union Leader and Channel 9.
Here are some interesting facts about Goffstown:

Record on Road against 2 4 33
Playoff teams

*** This team never played Pembroke, Pelham, Portsmouth, Lebanon, Coe-Brown, Kingswood, all playoff teams.
I hope these numbers are accurate. Thank you to the Assistant for supplying the web page. Why is it that I see sometimes in both NHIAA and the NHSportspage, that the Home Team is always on top of Box Score, it is suppose to be the other way around. Home team is always on the bottom.
Remember folks these are just numbers, take them as you wish. I love breaking down schedules and match-ups. I am thinking Bedford is next. I am picking these teams because they seem to be the ones that are being discussed the most. Chi-Kid be careful of Bedford, there win streak is good, but the competition is average or below.

Chi-Kid after a thorough investigation of the Bedford Bulldogs, you maybe right. This team has had one of the tougher schedules in all of DII.

Record on Road Against Playoff Teams 2 4 33

Record on Road against playoff teams 5 0 100

I believe Milford played Coe Brown in the Keene tourney didn't they?

You are correct sir.

My Picks for the first Round

Laconia @ Milford...Milford's scoreboard watching to see who they get to play for a 2nd time, in the 2nd Round. No disrespect to Laconia but I don't think anyone's expecting a "Miracle" moment here

Bedford @ Coebrown- hard to believe the 8. 9. game is between 2 teams that are 12-6. Both teams come in rolling to this game CB has won 7 of there last 8 games, and Bedford finished the season on a 6 game win streak with 2 wins of Souhegan and a nice win vs Goffstown. Although both are rolling I think Bedford is playing there best basketball right now and take this game by about 7-10 points.

Kingswood @ Pelham- Another game I don't think will be that close. Kingswood has only 2 wins against playoff teams and both are against the 16 seeded Laconia other than that they have struggled against quality teams. Don't think Spirou's still hurt but I see him getting some extra rest for that ankle, Pelham wins Big.

Oyster River @ Goffstown- Again very hard to believe that Oyster River is 11-7 and the 12 seed but they are. I think this is the first round game to go to atleast in D2 if not all of the playoffs. I wouldn't say Oyster River is stumbling into the playoffs but they certainly seemed to have been demoralized by that tough loss against Milford, including that game they come in 5-5 after starting 6-1. I'm sure Goffstown would love to redeem themseleves after losing by 23 earlier in the season to OR in durham, they're going to want to run and do there best to have the game in the 80's or above. I'm struggling picking this one, have changed my mind about 8 times since starting this post. I really want to say OR wins this game maybe because they won by 23 earlier but I'm going to say Goffstown plays there style of ball and shoots very well at home and wins this one in a close battle.

Kearsarge @ Pembroke- They played in the regular season in North Sutton and Pembroke won by 5. I don't think this one will be close. Pembroke's lack of depth won't come into play this game but it may in the 2nd round when they either have to play Leb or Souhegan

Souhegan @ Leb- Souhegan a 10 seed at 12-6 again, mind boggling how much depth there is in D2 this year. They just played in Leb and Leb got the best of Souhegan winning by 2, but Gilligan didn't play in that game. Gilligan hasn't played too much in the stretch leading up to the playoffs, he could be a little rusty. Another tough game to pick and another great game to check out if you're willing to take the ride. I think Souhegan goes out Leb and picks up the win in a tight game.

John Stark @ Portsmouth- Stark maybe one of the most dangerous 14 seeds in a while. They have a very good coach, and have the ability to shoot the lights out also have a young big man in Grattan who is rough around the edges, but he is 6'8 and should help Stark on the boards a lot as PHS doesn't have that kind of size. Portsmouth also has a very good coach, are a very solid defensive team they are holding there opponents to 41 points a game. This game has the potential to be a very good game but also could get out of hand, really depends on how Stark shoots. I think even if this game is close, Walker and Dicearse in the end will be too much.

Merrimack Valley @ Hanover- I know very little about MV, but they are another team that didn't fare well against playoff teams only teams they beat are Laconia twice and Kingswood both teams that should be bounced 1st round. I think Hanover takes this one pretty easy.

Great analysis bigman. Always love the d2 perspective. I think both tournaments are going to be great. It looks to me that both divisions are going to have some unbelievable second round games.

I appreciate yours as well on D1, especially since I have yet to attend a D1 game this year it gives me some insight on what I should expect when I go check out some of the D1 first and 2nd round games.

I was going to Milford , but after reading your piece I decided to go to Goffstown .I will go to Milford on Saturday. I am also hoping John Stark pulls an upset my cousin's kid is Leblond. 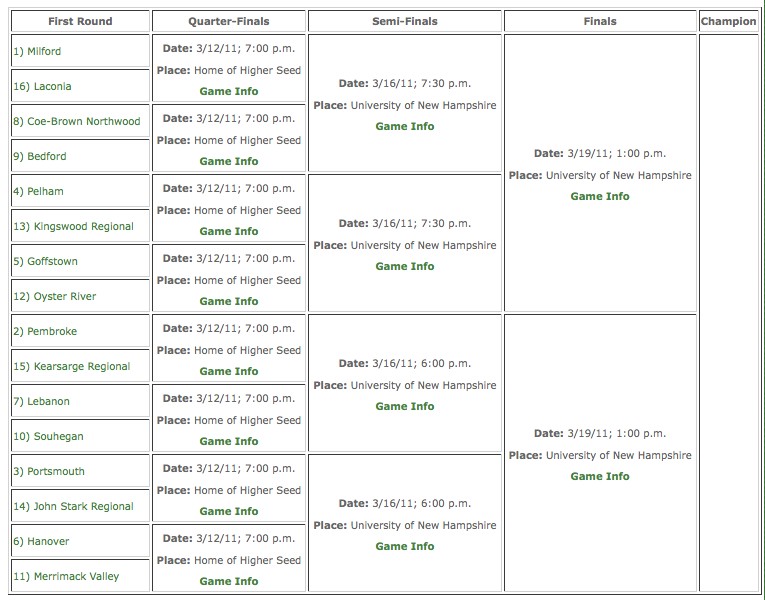 Just picking the first round for now: 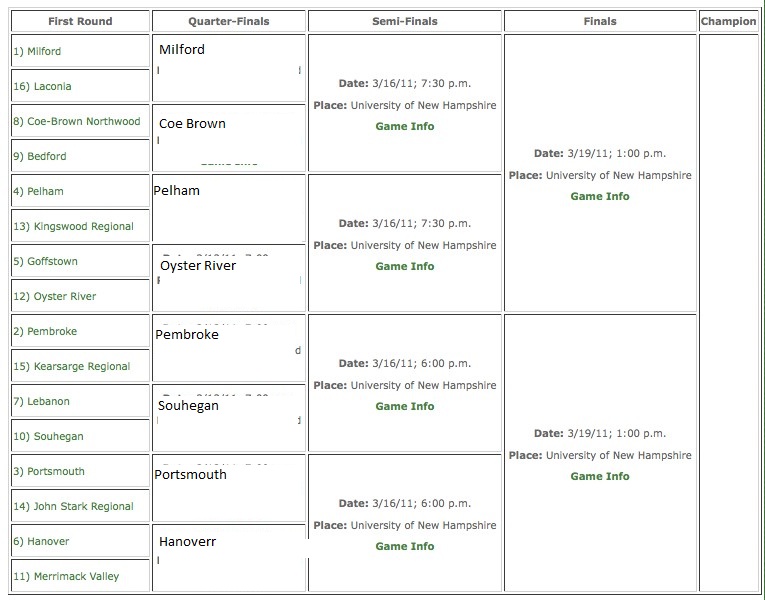 Milford is absolutely destroying Laconia 25-9 with a couple minutes left in the 1st. O'Laughlin must have close to 15 if not more. Him and Holder had back to back dunks early. Their defense is stifilng. Laconia has no PG capable of handling the ball. Mitchell hasn't even really gotten involved yet...
_________________
NH Sports Forum Administrator

Milford leads 33-13 after 1. O'Laughlin has really been on fire and Holder a catalyst on defense and finishing on the break. Turnovers are absolutely killing Laconia and leading to easy layups and dunks for Milford. Laconia started in a zone and Milford proceeded to hit 4 or 5 three's.

Kamara (sp.) has been a bright spot for Laconia finishing at the rim and making some athletic plays.
_________________
NH Sports Forum Administrator

Milford is up about 30 at halftime vs. Laconia. On pace for over 100. I'm sure they'll rest their starters. Lots of turnovers for Laconia is leading to lots of highlights for Milford. Holder had a nice steal he got turned around at about halfcourt and threw a no-look over the head pass (while facing Laconia's basket) to O'Laughlin who got fouled on the layup attempt. Back to back dunks in the first quarter...

O'Laughlin has 27 points...in 2 quarters. He's been on the recieving end of many of the breakaways - but also has hit at least 3 three's and all his Free Throws. Nice performance so far.
_________________
NH Sports Forum Administrator

Milford up 59-29 after 3. The beat continues. I might add this game has been officiated very well.

Portsmouth up big, 62-39 over John Stark

Thank you for the updates The Assistant. It is nice to know what is going on.

Milford over Laconia 80-38, Milford opened the first 4 or 5 minutes with 17-3 lead. Like Assistant said back to back dunks. I'll try an keep this short. O'loughlin 32 Holder 20 Mitchell 6 close to 10 assists. Solid team rebounding game for Milford, they shot the ball very well from deep and got to the whole at will. I was most impressed by Milfords defense from everybody. There trapping was outstanding most defensive intensity that i've seen out of them all year I think at least from a team standpoint absolutely great to watch. Solid Contribution from Kyle Nelson blocking/changing shots and on the boards, as well as Logan Barlow little scoring and did a good job of controlling the boards and I thought Richie Moore continued his great definsive play and added a few buckets. Laconia lacked a ball-handler badly as Assistant said. Laconia must've turned it over 30+ times. One bright spot for them was #23 didn't catch a name but he did all he could while he was in there, he may have forced a little too much but to be honest he had too. Oh yeah, and I thought the officials were OUTSTANDING!